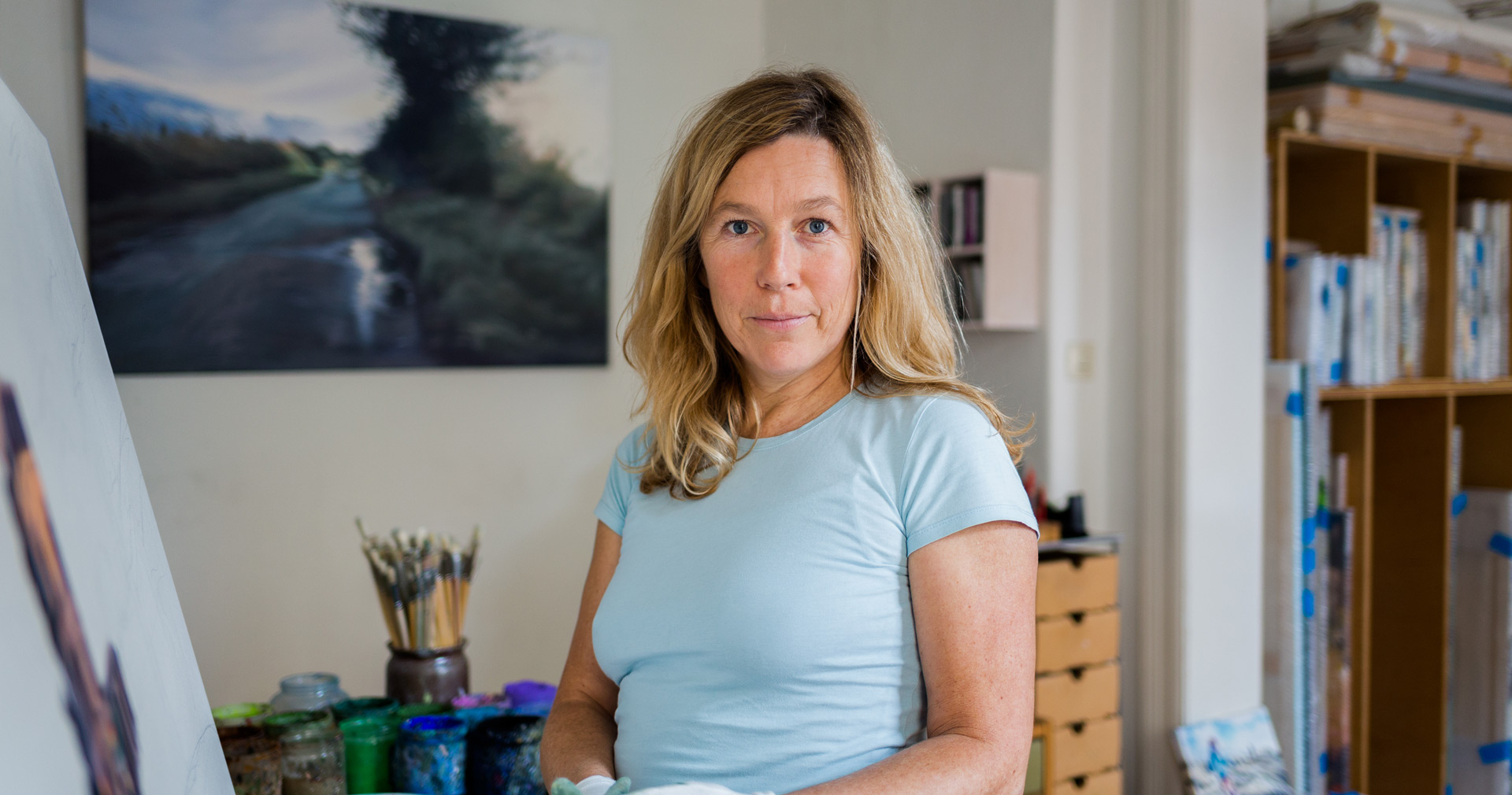 Susanne Wind ArtistMember of Bild-Kunst
photograph taken by Michael Bogumil
You are here:

Bild-Kunst has entered into co-operation with the collecting society TWF for the purposes of settling royalties in the “Cable retransmission” and “Private copying” lines. TWF is able to ensure a very granular distribution.

Film authors of Bild-Kunst who are involved in the creation of commercials keep Bild-Kunst as their point of contact and also receive their distributions through Bild-Kunst as usual. However, all the reporting and the calculation of the individual distributions go through TWF and its billing systems.

We explain below how you as a film author can submit reports for commercials.

For comprehensive information about the reporting process and how to use the reporting portal, please refer to the PDFs available to download (at the end of this page) and the FAQs.

How do I as a film author of VG Bild-Kunst get access to the reporting portal of TWF?

The member must inform VG Bild-Kunst that they have collaborated on the production of advertising films. They then receive an application form for access to the TWF reporting portal which must be completed, signed and returned to VG Bild-Kunst. Following processing by VG Bild-Kunst and TWF, VG Bild-Kunst sends the access data to the member by post.

The reporting portal can be accessed on the TWF website at www.twf-gmbh.de. In the bottom part of the page is a „Meldeportal“ button that leads to the login page. Alternatively, you can go directly via http://twf.xad.tv/login.

What are the technical requirements?

To use the reporting portal, you need a browser and internet access. All commercial web browsers are supported, e.g. Chrome, Firefox and Safari.

VG Bild-Kunst sends the film author a user name that also serves as their TWF ID. A password is given as well. Both the user name and the password are needed in order to log in.

How can I change the password I have been allocated?

You can and should change your password in the “Account” area.
There are no particular requirements with regard to the chosen password. However, it is recommended that you choose a password with a mixture of upper and lower-case letters and at least one number.

What do I do if I have forgotten my password?

You can request a new password by clicking on “Forgot your Password?” on the TWF start page at www.twf-gmbh.de.

You will then be sent an email containing a link that enables you to change the password.

Who do I contact if I have any technical problems?

In the event of technical problems that affect the portal directly, e.g. if you are unable to access it, you can contact the portal operator directly at twf[at]xad.tv.

Who do I contact if I have problems accessing the reporting portal despite entering my access details correctly?

If you have any login problems, you can contact Bild-Kunst first at werbefilm[at]bildkunst.de.

What period can I report, and by when?

To start with, commercials can be reported for the distribution years 2012 up to and including the 2017.

Can I report for 2018 yet? Will my reports for later years be taken into account, or do I have to report again for each year?

It is expected that reports for the 2018 distribution year can be submitted in early 2019, as the complete data set of the previous year is always supplied in the following year.

Reports that have already been made will remain stored for the future.

Should a commercial that has already been broadcast be broadcast again the next year, the report continues to apply. It is recommended that you check the portal repeatedly, however, as the system may identify new edited forms, for instance, as a new work.

We await a decision on this by the boards of TWF and will inform you as soon as we know anything more.

What commercials can I report?

In short, billable commercials must have been broadcast in the official advertising block.

On which stations must the commercials run?

All commercials that have been broadcast in the billable distribution years on the TV stations that can be received in Germany and that are recorded by the data provider commissioned by TWF (as at Dec. 2018: 49 stations). A list of the stations will be provided shortly.

Can I indicate my role?

In the reporting portal a film author can indicate which areas of each commercial come from their own contribution. Directors, camera operators, editors, set design/film architecture and costume design are offered.

What if my role is not listed?

It is not possible to submit additional free-form information in the portal. All types of rights that TWF can represent are always listed on the portal.

What happens if someone else is already registered for my role? Can I register myself as well?

Two or more reports for the same role in one commercial generate what is known as a collision in the system that is then clarified with the individual authors. There is no classic block as soon as report has been submitted.

VG Bild-Kunst is informed by TWF of any collisions and arranges clarification with the authors concerned.

Can I register % shares in a role if I am not the sole author of this role?

No, for technical reasons this is not possible (yet).

What happens if more than one person has collaborated on a commercial, such as two camera operators?

Collisions can only be seen internally, not by the individual user. Since there is no technical procedure for collisions yet, they are processed manually at the moment.
If the rights can be clarified prior to distribution, the rights are allocated accordingly and the amounts are distributed. Should this not be the case, the commercial concerned and the amount calculated are initially removed from consideration. The amount is then disbursed in the next distribution after the rights have been clarified.

Can an author indicate multiple roles in a commercial, e.g. director and camera operator?

Yes, a user can indicate multiple roles in a commercial.

If you have any questions about the content, in the first instance please contact the staff of VG Bild-Kunst at werbefilm[at]bildkunst.de.

Where can I find user instructions?

TWF has a manual for using the reporting portal available as a PDF document. It can be accessed at TWF-Handbuch.

How does the reporting process actually work?

After logging in successfully, you will find yourself on the start page. From here you look for the commercials on which you collaborated by using the search function. The parameters are “Kampagne” [Campaign], “Kunde” [Client], “Produkt” [Product] and “Stichwort” [Key word].

The search can be restricted by using filters, e.g. to define a time range. The results list shows the commercials with information on the client and product, a picture and the date of transmission. To submit a report, you must click on “Detailansicht” [Detail view]. As a film author, you then click on your role in the commercial.

Why can I not find a commercial?

This may be for a number of reasons. The main ones are:

What can I do if one of my commercials is billable, but it is not shown on the portal?

The portal covers almost 100% of all commercials, as it is also used by the advertising industry. Should one of the very rare exceptions occur, please send a short email to twf[at]xad.tv containing the following information:

Most film authors collaborate frequently with the same producers. They therefore usually receive the details of the campaign start date and broadcasts directly from them. Information on the product, client and producer is generally available.

For what copyrightable exploitation rights to commercials does TWF pay royalties for?

Film authors normally transfer the copyrightable exploitation rights to the film producers. This transfer of rights is remunerated with the fee. However, there are also remuneration claims that the law ascribes to film authors which can only be assigned to a collecting society. The royalties cover the remuneration for cable retransmission and private copying.

When will the distribution/payment be made?

The first distribution is expected to be made in spring 2019, after the closing date for reporting on 31.03.2019. In future distributions are to be made once a year.

What are the principles for calculating the individual disbursements?

The distribution system follows the “2017 distribution plan” of TWF, which is being decided by the boards of TWF at the moment.

Each reported commercial is given a points score that is modified by the following parameters:

These parameters are used to determine the value of the broadcast. A film author receives a share of the distribution in the ratio of their points to the total number of points.

Where can I find the TWF distribution plan, and who can I contact if I have any questions?

The applicable 2017 distribution plan will be published on the TWF website when it has been adopted. A link will then be set here.